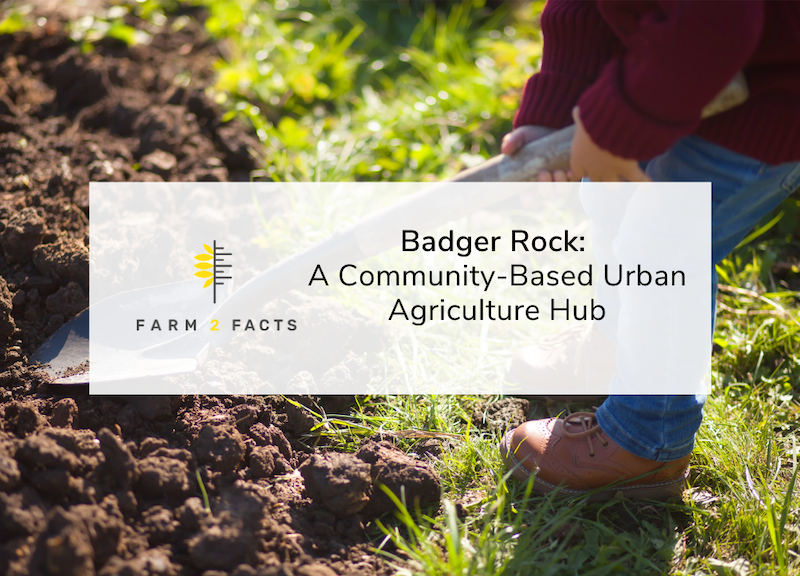 Badger Rock, located on the south side of Madison, WI, is a jack of all trades. It is a project based public charter middle school with a focus on urban agriculture, a production farm, an education farm for kids and adults, a community garden, and a neighborhood center. The program is a part of Rooted, a non-profit organization that promotes urban agriculture in Madison.
Before Badger Rock, the neighborhood lacked a community gathering space and green spaces. Now, they have a community garden with 45 plots, heated greenhouses, two hoop houses, beehives, and even chickens! At the middle school, they have a garden class where the students work in the garden and learn about urban agriculture.

Most of the students at the middle school are from the neighborhood. Sarah Karlson, the Farm and Education manager, described the program as a “POC-forward space”, where POC are prioritized, and the middle school is mostly made up of people of color. Sarah says that “the root of everything we do is relationship-building” and that the“tools that we use to do that are food”.

Their goal is to promote food sovereignty in the community, which the U.S. Food Sovereignty Alliance defines as “the right of people’s to healthy and culturally appropriate food produced through ecologically sound and sustainable methods, and their right to define their own food and agriculture systems”. Badger Rock provides people with the space to grow their own food as well as education on the food and growing it. Sarah said that before the classes, some of the kids only knew how to push a button on a microwave, and the classes provide them with a cultural and practical background of the food that they grow and cook together.

Since Badger Rock Middle School has been shut down due the pandemic, Sarah has hosted cooking workshops and garden workshops which she streams on the organization’s Facebook page. She invites guests from the community to show their food traditions. A couple weeks ago, a guest demonstrated how to make a three sisters (corn, beans, and squash) salad with a Southern twist!

Badger Rock also runs a farmer’s market that helps the neighborhood financially support one another and build community. The youth involved in the garden are invited to help run it, which Sarah says builds their understanding of food sovereignty and their entrepreneurship skills. They sell the produce at a very low cost, and all of the money they make goes back to reprogramming and projects for the students. Because of the increased food insecurity due to the COVID-19 pandemic, Badger Rock now also runs a food pantry where they distribute what they grow along with food from the Community Action Coalition and Second Harvest, which are also food pantry organizations in Wisconsin.
On the Badger Rock team with Sarah are: Brontë Adamson, the Badger Rock Assistant Farm and Education Manager, Hedi LaMarr Rudd, the Director of the Badger Rock Neighborhood Center, Kipp Thomas, the Badger Rock Kitchen Manager, Hong Tran, the Principal of Badger Rock Middle School, and Marcia Caton Campbell, the Executive Director of Rooted.

Their goal is to help people, so they will stretch themselves thin to make that happen and stick around until whatever is needed is done. Sarah describes their jobs as “heart work and soul work” and says that she is grateful for her job daily.