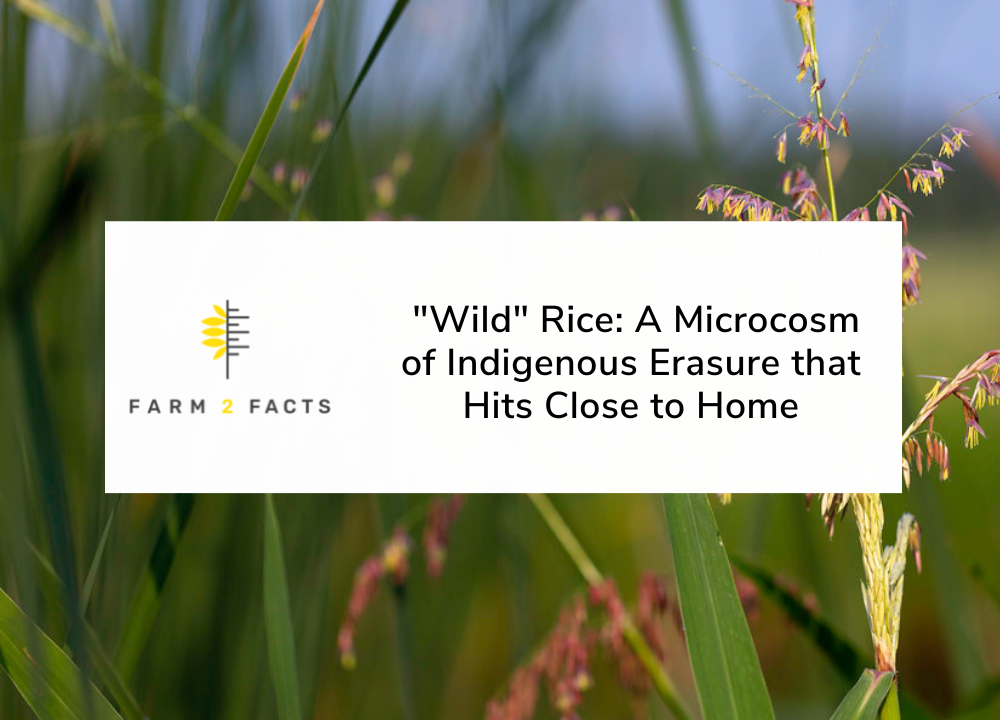 In honor of National Native American Heritage Month, we at Farm 2 Facts would like to offer a few words of recognition and contemplation as many of us return from spending time with our loved ones. For the Midwesterners among us whose November traditions revolve around the Autumn harvest, we are fortunate enough to access a great bounty of nutritionally and culturally rich foods that need not travel far to get to our plate, one of which is the grain commonly known as wild rice.

The only grain indigenous to North America, wild rice is deeply connected to the cultural history of the Anishinaabeg peoples, who call it manoomin. It was the center of a spiritual prophecy that prompted their westward migration to the Great Lakes region, “where the food grows on the water”. The wetland-dwelling grass has supported the Anishinaabeg for centuries since, with a high protein and fiber content that makes it nutritionally dense as well as a culinary delicacy. Traditional harvesting practices embody a deeply reciprocal relationship with manoomin: they involve knocking the seed kernels into the bed of a slow-moving canoe while intentionally allowing some to return to the water to foster the next year’s harvest. This intentional management of the crop, viewed as primitive and inefficient by the European colonialists who coined the term “wild rice”, has raised questions as to whether such vocabulary is appropriate.

Indeed, the ecological threats faced by manoomin are often obscured by its lack of recognition as an agricultural crop. The grass has been historically susceptible to environmental contaminants and has diminished or fully disappeared across lakes in the Great Lakes region, partially associated with the increasing variability in temperature and precipitation caused by climate change. Genetically engineered, paddy-grown wild rice— which accounts for more than 95% of the market for this crop— is more resilient to these ecosystem impacts because it can be easily manipulated through modern industrial agricultural techniques. Notably, this domesticated and patented variety cooks and tastes differently than true manoomin, despite often seeming indistinguishable on the packaging (so, if you want the real thing, try a local farmers market!). It has been the center of many courtroom battles in the Midwest concerning indigenous agricultural rights and the expropriation of genetic and cultural material for financial gain.

Manoomin sits at a nexus of many of nuanced environmental issues that have come to define the 21st century, such as biopiracy and the disproportionate impacts of climate change on marginalized cultures. Yet, it also serves as a reminder of our nation’s colonial history, and how it undermined systems of indigenous knowledge that emphasized the interconnectedness between humans and the land. As the harvest season comes to a close, let us acknowledge the history of the land on which we reside. Let us consider the social and epistemological benefits of combining cultural knowledge with modern science. Finally, let us give thanks to the lands and the people that provide us with wonderful, nurturing food, as well as the local farmers markets that bring us closer to them.

*The author of this post is a U.W. Madison undergraduate who does not speak from any firsthand knowledge. The vocabulary used in this writing is that which he believes best elevates indigenous perspectives without claiming any affiliation with them.

Sign Up for Our Newsletter!
REQUEST A DEMO
BACK TO BLOG